In October 2015, David and I had the pleasure of taking a California vacation with David's aunt and uncle who live in Southern California.

Yosemite National Park was on my bucket list for places to see and photograph.  And, so when we mentioned we'd like to visit, we also decided to go to Mammoth Lakes for a few days as well.

On our drive up to Mammoth Lakes, I distinctly remember seeing a directional sign on the highway for Convict Lake, and thought to myself, well that's a strange name for a lake.  It definitely did not inspire me to visit.  I'd never heard of it either.  It wasn't in any of my photography guide books as a must see place.

Now fast forward to the next day.  Having arrived at Mammoth Lakes late, we were astounded by the beauty of the area, but I wanted to see more of the aspen gold.  I wanted to walk among the aspens, photographing their beauty.  And, well I was left wanting.  So that evening, iPad in hand, I Googled, and low and behold I found a local photography club that had just that morning visited Convict Lake and there were numerous photos of the golden aspens along a very nice boardwalk trail.  So while Anette and Terry stayed behind at the lodge, David and I headed out to Convict Lake.

I was thrilled to find the boardwalk trail through the golden aspens. 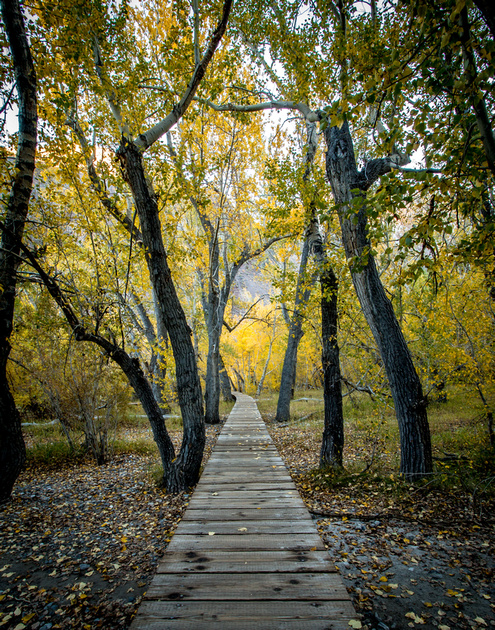 The trail at Convict Lake is about 3 miles total that follows the shoreline, you can hike in either direction around the lake starting next to the boat launch.  The trail is relatively flat and so it was a relaxing walk among the gorgeous scenery.  At the back of the lake there is a board walk that crosses the creek.

Convict Lake is known for good fishing and I did see a fisherman or two on the lake.

"Situated at the base of Mount Morrison, the deep blue waters of Convict Lake invite you to enjoy a liesurely picnic or stroll along the lakeside trail.  The epitome of peacefulness today, Convict Lake got its name from an incident that was nothing but peaceful.  In 1871, six inmates from a Nevada prison escaped here, and eventually battled their way out with a shootout, ultimately giving Convict Lake its name."

My husband, David, being a Star Trek fan, was thrilled to learn that Convict Lake was the filming location for several scenes in the 1998 film Star Trek: Insurrection, according to Wikipedia.

As David and I finished our leisurely 3 mile hike around the lake, the sun was starting to set and I was looking forward to capturing a glorious sunset lighting up the sky and reflecting off the lake.

I grabbed my tripod and scouted out a location.  The perfect spot had already been "taken" by another photographer with similar intentions, so I set up just a few feet away so as not to infringe on her space.  Us photographers have a mutual respect for each other.

As often happens while waiting for the light to be just right, the photographer and I started with some small talk.  Turns out she was an amazing woman, world traveler, the award winning photographer and writer, Baroness Danute from France.  Later she suggested I move my my tripod and camera down next to her as it was a better viewpoint.  She was so right.  We had a wonderful conversation; she was so interesting.  You can find out more about the Baroness and her adventures at http://www.baronessdanute.blogspot.com.

Well the sunset was not the spectacular event I had hoped for.  A sunrise might have been better at this location, but alas, I made the best of the time and place. 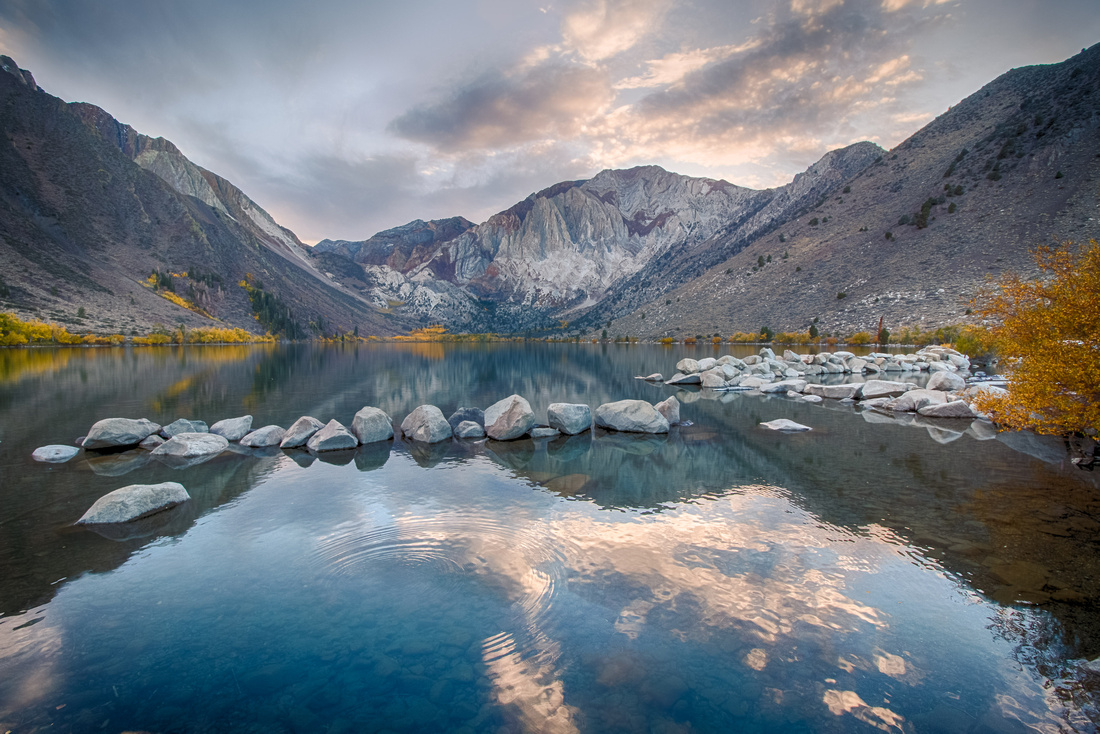 The Baroness packed up and left and I was left waiting for the last light.  A family of raccoons sauntered up to keep me amused.  And calls of wild animals in the not so far distance kept me feeling slightly on edge, with that feeling you get when you are watching a scary movie and you just know something is about to jump out and scare the bejesus out of you.   Don't worry, my husband was nearby talking to a construction worker, and there was a construction crew working the roads just down the way.  In fact, a mountain lion was spotted drinking from the lake, about 200 feet from where I stood.  Nice to know after the fact.

My patience (and my husband's patience too) paid off.   Just after the sun went down, I got this. Notice the light trails which I thought added just that interesting punch of light, highlighting the golden aspens.  The construction crews were driving the loop road, and around the other side of the lake, a few hikers were caught after dark and their flash lights cast a subtle glow. 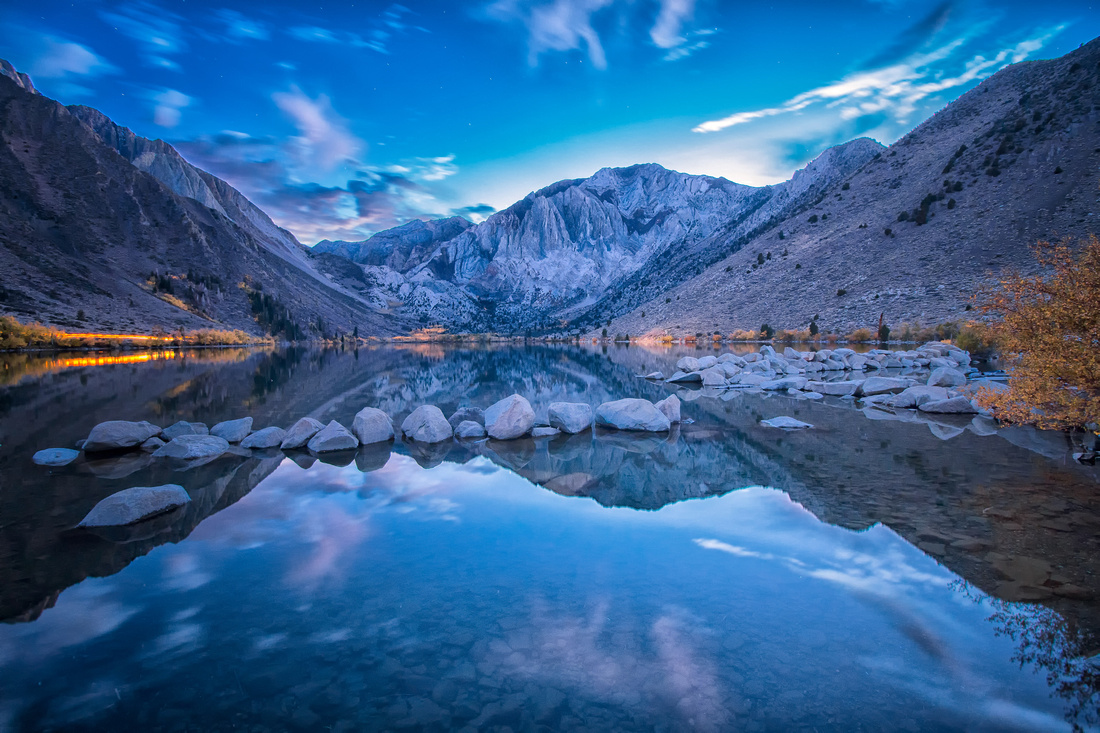 I am so thrilled to share this photo with you.  I've shared it with thousands on my viewbug portfolio and am pleased to say it has been a finalist in two competitions.  Most recently, this photo was a finalists in "A World of Blue", I was just notified today and so, I was inspired to write this blog.

For my fellow photographers out there, this was  3 exposures blended with HDR Efex Pro 2, ISO 800, Aperture 5.6, taken with my Canon 70D and Canon 10-18mm with polarizer filter, on a tripod.  I had to use a larger aperture than I normally would have in order to keep the ISO down and I had forgotten my shutter release.